Another Update on Alleged Patent Infringement 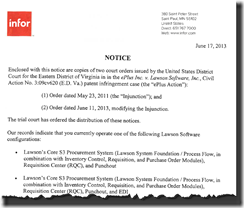 Back in 2011, Lawson responded to an Alleged Patent Infringement by replacing Requisition Self-Service (RSS) with Requisition Center (RQC). In the meantime, Lawson has been acquired by Infor, but the patent case still lingers.

Here’s an update. Some of you might have received this notice from Infor, and are unsure how this might impact your organization. The usual disclaimers apply: No, I’m not an attorney, nor do I play one on television. Here’s my interpretation.

The court has modified the finding against Lawson/Infor by removing the RSS-only configuration; since the bulk of customers have upgraded to RQC, it no longer applies. This leaves any customers using either punchout, or EDI in conjunction with punchout (essentially, punchout functionality was the original basis of this alleged patent infringement). Those customers are at risk of not being supported—for any Lawson product—if they have punchout or EDI installed on the server.

And yes, I have had customers who were refused support in this configuration even though the case had nothing to do with procurement.  The case is turned over to the client’s account rep to figure out what products need to be replaced in order to comply with the court order.