LWSN: Watch Your Back!

For several years now, I’ve been telling Lawson (and anyone else who’s been listening…) that Microsoft–not SAP and not Oracle–is the competitor that Lawson needs to watch out for:

In articles and discussions over the past several years (for example, see Lawson’s Road Ahead: Smooth Ride or Rocky Terrain? and The LawsonGuru Letter Interview: Dean Hager), I’ve been saying that Lawson portrays itself as a top-tier ERP vendor, ignoring the smaller/mid-market clients.  Many of whom feel there just not big enough to get, and keep, Lawson’s attention, and leave for “smaller” packages from Microsoft and Sage.

In fact, looking at the ERP market share graph from CIO Magazine that I posted in Lawson: “The 6% Solution”, I see an awfully alarming situation: 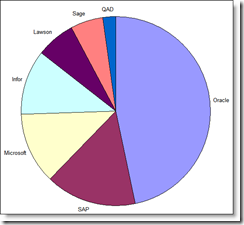 Seems, now, that I’m not the only one:

“Given the consolidation in the industry, we worry that as Lawson’s major competitors are increasing in size they are becoming more formidable. Moreover, Microsoft (NasdaqGS: MSFT – News) has entered the low end of the ERP market, and may move up-market by targeting Lawson’s core segments.”

4 responses to “LWSN: Watch Your Back!”